Maison DEGRENNE is proud of its ‘Entreprise du Patrimoine Vivant’ label awarded to companies that embody French excellence in craftsmanship and manufacture. At the Vire and Limoges production centres, that excellence is achieved by men and women passionate about their craft, who perpetuate expertise and skills passed down by previous generations, and are always ready to succeed in new challenges. 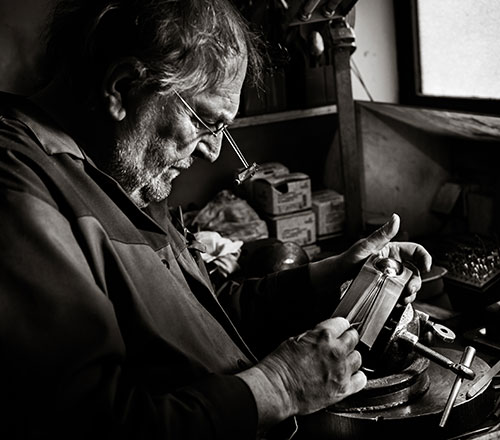 The strength of DEGRENNE is rooted in the talent and loyalty of craftsmen like Gilles Colasse. Originally recruited to work at Vire for three months, he is now in his 42nd year with the Maison and a few months away from retirement. He describes himself modestly as “not too clumsy”.

The job of the engraver is integral to the tradition of cutlery manufacture, and consists of creating and developing new models and the tools required to produce them, followed by the standard reference pieces used for the dies that will be used to create the decorative motif in the forging process. In his workshop on the northern side of the factory - to ensure that gets the North light that neither dazzles nor reflects off the steel - he lists his tasks: “Feasibility, mockups, the initial tools, their refinement, the production tools, their duplication and their correction... not only for cutlery, but also for tableware”. His favourite tasks are always the most difficult ones. “If it’s too easy, it’s not fun!”, he says. And although computing has changed the work to a degree, the work done by Gilles remains an irreplaceable skill.

Cutting steel coil into blanks, scoring, hot forging, rolling, clipping, quenching, sharpening... Most of us would never guess the number of stages needed to make a knife, but all of them are supervised by Denis Richard. Although a mechanised process, this is demanding work requiring advanced technical skills and enormous attention. Son of a DEGRENNE craftsman, Denis Richard has one of the longest memories of company life. He was only 16 when he followed in the footsteps of his father. He remembers the passion and technical skill that drove “Monsieur Guy” - the company founder - and the pride he took in his machines, including the “Hack Line”, which is still in service and revolutionised production of one-piece knife blades.

Today, with 44 years of service, the eldest employee in the Vire factory is still as demanding as ever when it comes to quality. He still enjoys perfecting the production machine settings for new models, and experimenting with new processes to get the very best out of every machine. 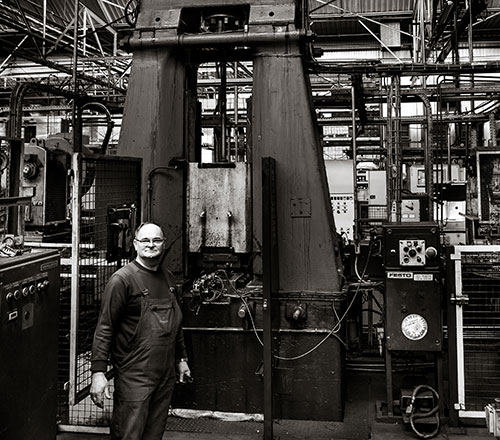 Love of the job is the phrase that comes up most often when you talk to DEGRENNE craftsmen. And Bruno Dumontier is no exception. Having moved to Vire from the Seine-Maritime region in 1987, he has spent his entire career as a holloware polisher. The work is complex, fairly physical and occasionally dangerous, and the appearance of the final product is everything. And then there’s the pace of work: one Salam teapot every minute, for example. After stamping, the finishing process consists of removing any small irregularities, faults or scratches to achieve a perfect appearance. It begins with brushing the base, the outside and the inner rim, followed by mechanical polishing of the surfaces. “The tools have changed very little, and it’s still an essentially manual operation”, explains Bruno Dumontier, who also has responsibility for polishing the company’s prototypes.

A range of different tools and abrasives are used, depending on the final surface finish required (shiny, mirror finish, etc.). Now five years away from retirement, Bruno is in no rush to leave. “It’ll be difficult. I love it here. It’s my passion, and my life”.

At the end of the production process, the pieces are washed and degreased to remove any trace of polishing paste or grease. They are then checked individually and inspected by gloved hands before being automatically placed into a plastic pouch and packed in dozens into a box ready for shipping. That’s the job of Martine Marie, although in her 22 years with the Maison, she has been trained by the most experienced of craftsmen and developed many other skills, including the lacquering of children’s cutlery, the brightening of silver plate, the production of knife handles and sales. Quality control demands a keen eye and extreme concentration to identify those pieces that must be repolished or repaired.

What’s at stake here is nothing less than the DEGRENNE reputation for quality, to which Martine is proud to contribute: “Ours is still a great name. I’ve noticed that people come a very long way to buy our products from the factory shop" 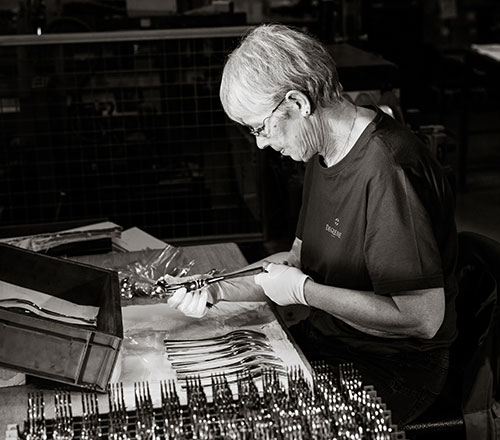 The adventure begun in 1948 continues, with the same spirit of innovation and the same concern for excellence that have characterized the House since its creation.

We will make every moment a powerful emotion... We have everything that makes lifestyles special ahead of us.